Is that a JoJo reference? Probably not 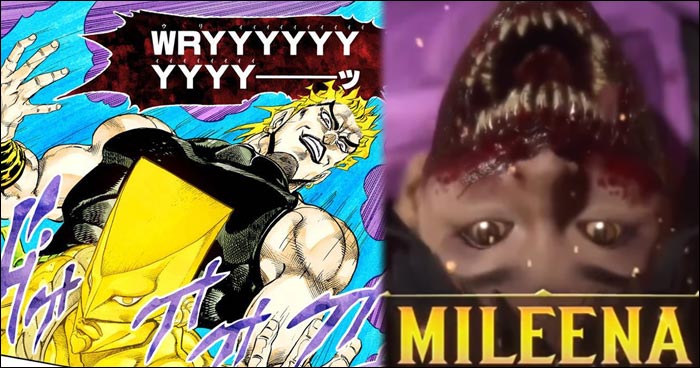 We’re likely less than a day away from the reveal of Mileena’s gameplay trailer for Mortal Kombat 11, but there’s still new tidbits of info flowing out to hold us all over until then.

A new advertisement has started appearing on Instagram for MK11 Ultimate that showcases one of Mileena’s selectable victory poses that’s a bit spine bending.

The ad itself is fairly simple since it pretty much just contains the victory pose with the text ‘Mileena Outworld’s Heir,’ so there’s not really much more insight to garner from it.

For the pose, or the part of it we see, Mileena bends over backwards and stares at the camera upside down with a bloody smile on her face.

The way Shao Kahn’s daughter moves her arms at the start though almost makes it appear quite similar to an iconic pose of Dio’s in JoJo’s Bizarre Adventure except she just keeps bending backwards.

While NetherRealm Studios hasn’t shown off any gameplay teasers for Mileena just yet, they have confirmed some of the moves that’ll be returning to her arsenal when Ultimate launches on November 17.

You can check out the ad and Mileena’s new pose below thanks to Dynasty.