Gmail and Telegram already come with a schedule option for sending, and now Google’s Messages app is joining the club. The functionality has started rolling out for a few people as part of what appears to be an a/b test, as spotted by Twitter user Sai Reddy. The option replaces the long-press shortcut for sending an MMS with a subject.

So far, it looks like the feature hasn’t rolled out widely, so it may take a while until you can schedule messages on your phone. You can check if you got in on the feature by tapping and holding the send button in a chat, which should either open the schedule dialog or the MMS subject interface. In the former case, a new dialog opens that prompts you to schedule a message with a note that it will only be sent if your phone is turned on. You can either choose from a collection of predefined options or select a specific time and date. The scheduled message will appear in your chat as a preview, which you can tap to change.

Above: Tap and hold the send button to schedule. Below: Tweak the scheduled messages by tapping it.

If you wonder how to add a subject line with scheduled messages enabled, look for a new Show subject field entry in the three-dot overflow menu in the top right corner of a chat. 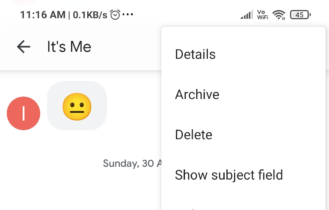 You’ll still be able to add MMS subjects in the overflow menu.

Ever since Google axed Allo and started focusing on RCS, it’s been putting in a lot of effort into making Messages a viable alternative to Facebook Messenger, WhatsApp, and Co. On top of features like categories and intelligent attachment suggestions, it’s even gained some SMS-specific tricks like an option to automatically delete one-time passwords after 24 hours. You can download the latest release on the Play Store or over at APK Mirror, but note that not even the beta will necessarily enable schedule send for you. You’ll have to wait and hope that the server-side rollout reaches you sooner rather than later.