Judah Mackey started December on the saddest of notes.

Man, we sure hope Santa Claus has something special in store for The Young and the Restless’ Judah Mackey, who plays Adam and Chelsea’s son, Connor. The poor kid began the holiday season with a terrible loss.

“We said goodbye to our dog Clyde today,” read a December 1 post from his parent-run Twitter account. “He was our best buddy and lived 16 and a half happy years.”

More: Who *was* Michelle Stafford gazing at so adoringly?

Though of course saddened to lose their four-legged family member, Mackey was “thankful for the time we had together.

“His warm cuddles will be missed,” he added. “Rest in peace, sweet boy.”

We said goodbye to our dog Clyde today. He was our best buddy and lived 16 and a half happy years. Thankful for the time we had together. His warm cuddles will be missed. Rest In Peace sweet boy. 🐶 🤍

At least the rising star has a few things in the works to distract him from his heartache. On December 4, Apple TV+ premiered Stillwater, the new animated series in which his character lives next door to a panda named… well, his name is the title of the show. You can listen for Mackey in the trailer below.

The youngster is also likely to appear in Season 2 of Apple TV+’s The Morning Show since Steve Carell, who plays his father, has signed on to return as disgraced anchor Mitch Kessler. (Our sister site TVLine has all the details.)

Ironically, on The Young and the Restless, Connor was allowed by his parents to adopt not a dog but a sweet stray cat. Here’s hoping that his portrayer and his family will one day be able to add a new furry friend to their household. 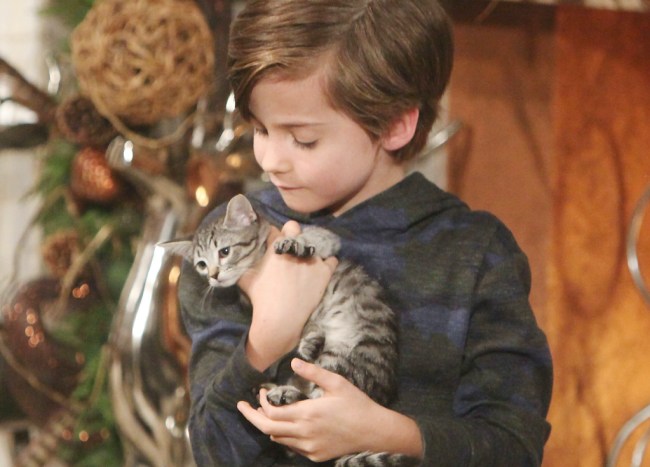 In the meantime, since you’re here, why not try to get into the holiday spirit by reviewing the soaptastic things for which the editors of Soaps.com are giving thanks in 2020. We’d put the odds at 70/30 that you’re grateful for some of the same twists and turns, stars and stories.