Apple‘s (NASDAQ:AAPL) fiscal first quarter of 2021 — a three-month period that wraps up at the end of calendar 2020 — could be a big quarter for iPhone. One analyst says sales of the tech giant’s newest iPhone lineup appear to be skewing toward Apple’s highest-end models. If this is true, it would be good news for Apple’s top and bottom line during the period. Strong demand for Apple’s highest-end iPhones would add to several other reasons to be optimistic about the segment.

Given how important iPhone is to the tech company‘s business, strong results from the segment could make Apple stock more compelling. 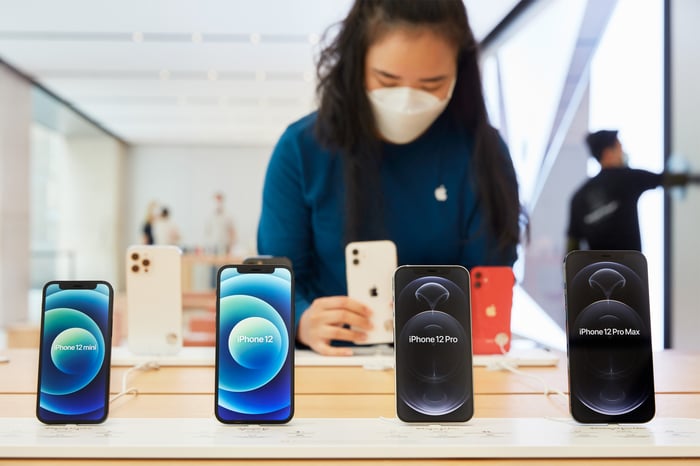 This “is a favorable indicator of customer demand,” Chatterjee believes.

High demand for Apple’s priciest iPhones, of course, could help drive the devices’ average selling price higher. This would likely help both product revenue growth and the segment’s profit margin, as Apple has historically achieved higher profit margins on its most expensive models.

Strong iPhone results may be in the bag

Chatterjee isn’t shooting in the dark when he predicts a good quarter from iPhone. There are two more good reasons investors should expect strong results from the major product segment.

First, Apple didn’t launch the iPhone 12 Mini and 12 Pro Max until mid-November this year. In the year-ago period, however, Apple launched all of its new iPhone models in September. This means the initial spike in new iPhone sales that typically falls in the end of fiscal Q4 was carried over to fiscal Q1 for the iPhone 12 product cycle.

Second, Apple CFO Luca Maestri specifically noted in the company’s fiscal fourth-quarter earnings call that the company expected to return to year-over-year growth in its iPhone segment during fiscal Q1.

“We just started shipping iPhone 12 and 12 Pro, and we’re off to a great start. We are also excited to start preorders on iPhone 12 mini and 12 Pro Max next Friday,” Maestri explained. “Given the tremendously positive response, we expect iPhone revenue to grow during the December quarter.”

Though Apple’s fast-growing services and wearables businesses may be its most important growth catalysts, iPhone performance is still critical to the company’s financial performance — and to how investors perceive the stock. This is because the iPhone is the company’s largest product segment by far, accounting for half of trailing-12-month revenue. This compares to Apple’s services business — the company’s second-largest segment — accounting for 20% of trailing-12-month revenue.

If Apple can pull off strong growth in its iPhone business in fiscal Q1, it could give the company’s financial results a huge lift. Sure, investors should want more than a single quarter of growth from the product segment. But if Chatterjee is right about the demand levels for the new iPhone, the company could be on the right track. To gauge how Apple’s iPhone business is doing, investors should look to both the company’s fiscal first-quarter results and any commentary on iPhone during the company’s earnings call.