The natural athlete versus a couple of cheaters infused with steroids. We can’t believe we’re saying this, but the Porsche 911 Turbo is such an underdog in this drag race that we’re rooting for it to win, even though it looks completely outclassed.

This Carwow drag race is likely to be the last of 2020 and it demonstrates just how far tuning can push cars that are already very fast. In this case, the 911 Turbo S acts as a sort of benchmark or yardstick. This may not look like a supercar, but it’s won pretty much every shootout it was involved in, as it’s already beaten a McLaren 720S, a Ferrari 812 Superfast, and a Lamborghini Aventador SVJ.

The current Turbo S model has its twin-turbo flat-6 dialed up to 640 hp (650 PS). At the hands of American magazine Car and Driver, it’s said to have done the sprint to 60 in just 2.2 seconds and posted a 10.1s quarter-mile time. But Carwow doesn’t have the ideal track or weather conditions.

Back in October, the same type of Porsche raced against another Audi RS3 sedan. This was powered by a heavily modified version of the 2.5-liter which made 716 hp yet lost to the 911. So is this 800 horsepower model going to do any better, and can you even put down that much power in what’s basically just a compact car?

And if the Audi wasn’t enough of a headache, that blue BMW M5 is making around 1000 horsepower. That’s right, the power of the Bugatti gods at the fingertips of an AWD sedan. Yeah, the Porsche did lose the race. But the thing is, you can probably also get 1000 horsepower from that thing, not to mention the tuned cars appear a bit tricky to operate, whereas the Turbo S will do the same quarter-mile runs all day. 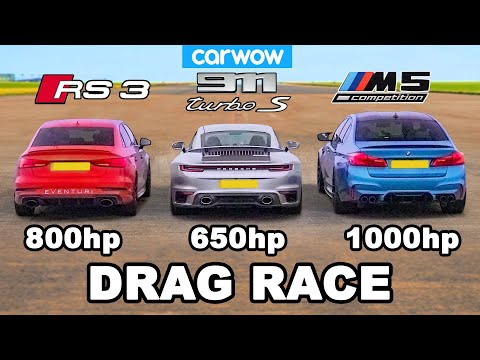