When it comes to sport utility vehicles, it doesn’t get much sportier than the Lamborghini Urus. The same can be said about the Shelby F-150 Super Snake Sport in the realm of pickups, a no-nonsense street bruiser with 770 horsepower on tap from a supercharged Coyote V8 motor.

We already know the
Super Snake Sport is capable of whooping the TRX on the blacktop, but does it hold a candle to the Italian contender with German underpinnings? On paper, the truck should win from a standstill and a roll thanks to the higher torque rating and lower curb weight.

The Urus, on the other hand, is gifted with some particularly interesting electronics that should help eliminate wheel spin. First time out on the track, the Lamborghini geared up for the quarter-mile dash in Corsa Mode and with Launch Control turned on while the Shelby rocks Sport Mode and 4H.

Believe it or not, the Lamborghini launches harder, keeps the Shelby at a considerable distance, and crosses the finish line first without breaking a sweat. On the second attempt, the Urus digs a little worse without Launch Control but manages to obliterate the American challenger over 440 yards.

For the third and final outing, Throttle House compares these behemoths from a roll. As controversial as the Urus may be over its Volkswagen Group platform and Porsche twin-turbo V8 engine, the muscled-up truck didn’t stand a chance against the more exquisite brother of the Audi RS Q8.

Then again, what did you expect from an uber SUV that retails from $218,009 in the United States? The F-150 Super Snake Sport, by comparison, is available from $93,385 including the well-optioned donor Regular Cab.

“A lively thing at all times” according to Throttle House, the Urus isn’t the fastest SUV in the world, though. That title goes to another Volkswagen Group utility vehicle by the name of Bentley Bentayga Speed, which is rated at 306 instead of 305 kph. In American money, make that 190 mph. 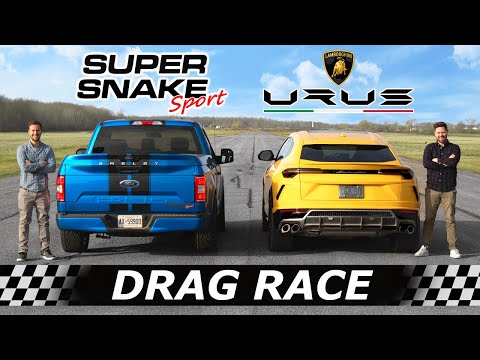