Skip to content
Back in the late 2000s when the
R35 Nissan GT-R was introduced, Nissan aggressively targeted the Porsche 911 Turbo, Nurburgring lap times and all. And while Porsche has introduced the next generation of the Turbo Neunelfer for the 2021 model year, Godzilla has yet to receive a new generation. So, how does the young rear-engined coupe stack up against the Japanese machine in a straight-line confrontation?
The answer comes from the three-way challenge we have here, with the third ingredient of the mix being the Audi R8, which used to be another regular for Porsche 911 comparos. As is the case with its two rivals, the Ingolstadt supercar is here in the sharpest configuration available, which means we’re looking at the V10 Performance model.

Oh, how times have changed for the GT-R: while this debuted as a budget alternative to traditional supercars, the latest Nismo version sitting before us makes for the most expensive member of this lot, even though it must be said that the Porsche can be configured past the price of the Nissan. In fact, Zuffenhausen has even developed a special algorithm that can help customers navigate the small universe that is its configurator.

As for the Audi, one might wonder how does the machine with the biggest engine of the three and a V10 nonetheless, ended up being the least expensive here.

Now, the drag racing addicts over at carwow, who brought these beasts together, treat us to their routine. As such, the piece of footage below kicks off with a standing start drag race, which is followed by a pair of 50 mph/80 kph rolling races (think: normal and sport driving modes) and a braking test from 70 mph/113 kph.

And while we don’t want to risk throwing too many spoilers at you, we have to mention the Audi showed dominance in two scenarios that are quite important when it comes to everyday driving. 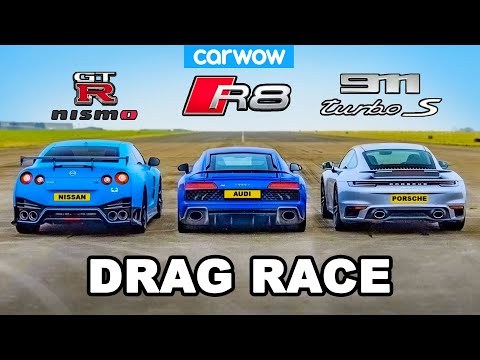